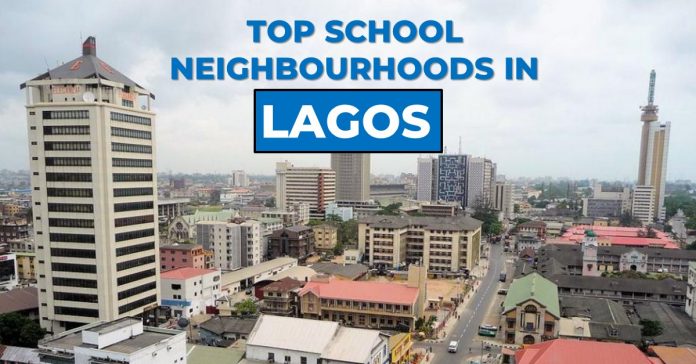 Top neighbourhoods in Lagos in Lagos have some things in common – They are classy, secure and offer a wide range of facilities that make them a prime target for Nigerians and expats looking to relocate to Lagos.

Ikeja is known for its power, pride and prestige. This neighbourhood is largely considered the state’s seat of power and the reason is simple. It is where the state governor’s office, airports, State Security Service (SSS), the House of Assembly and many other key government parastatals are located.

In simple words, Ikeja is rich with history and it doesn’t come as a surprise that it also has some of the most prominent schools in Lagos. The neighbourhood has both government-owned and privately owned schools. Some of the public schools in Ikeja are Opebi Grammar School, Ikeja Senior High School, Opebi Primary School and Immaculate Heart Comprehensive High School and missionary schools like Maryland Comprehensive High School.

Young couples with toddlers also have a wide array of creches to choose from. Looking to rent or buy an apartment in Ikeja? Below are ranges of what it costs of buying and renting a home.

Renting an Apartment: A 3-bedroom apartment in Ikeja is pegged at between between N400,000 and N6 million yearly depending on where you eventually settle for. Bear in mind that districts like Ogba, Ojodu and Berger all fall within the Ikeja neighbourhood.

Buying a House: You need between N25 million and N600 million to buy a house in Ikeja especially if you are looking at a minimum of a 3-bedroom home.

This neighbourhood captures the essence of all that is posh, stylish and exquisite. The amenities in Victoria Island are some of the best that Lagos has to offer and this includes its schools.

The National Open University of Nigeria, a tertiary institution has one of its campuses in Victoria Island. The location is highly secure given its proximity to the military barracks.

The Corona Schools stands as one of the oldest and most respected schools in Lagos. have been around for a while. The school was founded in 1967 and is open to children between 3 and 11 years.

The British International School in Lagos is recognised as one of the most elite and exclusive schools in Nigeria.

Victoria Island is a healthy mix of a quiet residential neighbourhood, a growing business hub, lots of outdoor space and the most expensive restaurants in the Lagos metropolis.

Buying a House: If you would rather buy a house in Victoria Island, a 4-bedroom detached bungalow would cost you between N35 million for a one bedroom terrace apartment and N6 billion for a 6-bedroom luxury flat.

Ikoyi is the home of luxury and is famously known for its Banana Island, which Forbes ranks as the most expensive neighbourhood in Nigeria as well as impressive schools.

The neighbourhood offers upscale living with quality houses and good security and its top-class facilities have made it a prime location for celebrities, upper-class citizens and a long list of prominent personalities.

If you have a soft spot for living in a neighbourhood surrounded by water, beaches, scenic beauty and a good road network, then Lekki is the place to live.

From their architecture to the quality of education they offer, Lekki schools are top of the crop. If you plan to relocate to Lekki, below is a picture of what to expect in terms of renting an apartment or buying a house.

Renting an Apartment: A self-contained apartment in Lekki goes for between N600,000 while a 4-bedroom duplex can go as high as N48 million.

Buying a House: You need between N38 million and N300 million to buy a house in Lekki especially if you are looking at a minimum of a 4-bedroom home.

Ajah is a great neighbourhood to raise a family. The neighbourhood has decent restaurants, bars, hotels and schools. It is also rich with handymen and skilled residents whose presence makes living cost-effective.

Education is at the heart of life in Ajah and this neighbourhood has a lot of schools. Learning institutions like Forever Joy Schools, Goldline Schools, Evangel School, Ahava Schools, Liberty Bells Schools and Regal Star School are in Ajah.

The neighbourhood is also home to the Lagos Business School – Pan Atlantic University, which is famed for its professional certification.

Renting an Apartment: To rent a 4-bedroom apartment in Ajah in Lagos, your budget should sit between N400,000 for a mini-flat and N2.5 million for a 5-bedroom duplex.

Buying a House: A 3 bedroom terraced duplex in Ajah will cost you between N38 million and N165 million to buy an 11-bedroom duplex in Ajah.

Regardless of whether you are relocating to Lagos or within districts of the city, the decision of where you chose to live and the school that your child attends should never be taken for granted.

Red Flags to Look Out For During Home Inspection

The Pros and Cons of Using Property Agents