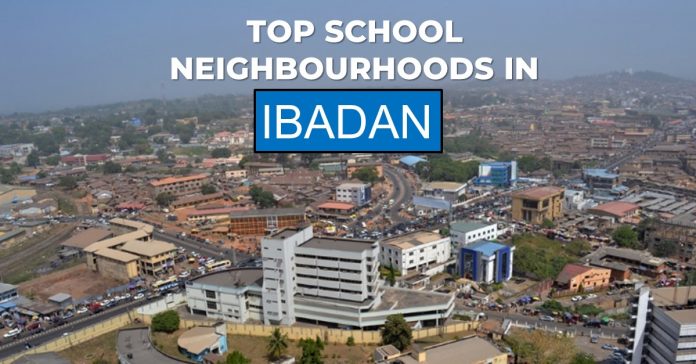 The decision of getting a good school for your son or daughter is a very personal choice. If you live in Ibadan, there are several neighbourhoods to choose from but ultimately, you want the best for your child.

You don’t have to go through the stress of visiting every single school in Ibadan before you pick one to enrol your child in. We have made this simpler by helping you identify the tops school neighbourhoods in Ibadan as well as highlighting the elements that make them stand out for your child.

This neighbourhood in Ibadan is known for its astonishing mansions and luxury homes but that’s not all. It’s also known for being home to Lead City International School; one of the top schools in the city.

Residents of this neighbourhood are retired top army officials, prominent politicians, expatriates and a growing number of distinguished members of the society.

Buying a House: Planning to buy a house in Jericho GRA, your budget should fall between N40 million for a 4-bedroom duplex to N70 million for a luxury 5-bedroom terrace house.

This district has its fair share of prominent schools in Ibadan and the first school on its list is the Lifeforte International Schools. Finding your way to the school is quite easy as described on its website.

The school is a co-educational Private Christian Institution, consisting of the Preschool, Junior and High Schools for children between the ages of 3-18 years. It was founded on the 5th of November 1990 by Pastor Olubi and Sarah Johnson.

Buying a House: If you would rather buy a house in Awotan, a 4-bedroom detached bungalow would cost you between N15 million and N50 million.

Bodija is a classy neighbourhood in Ibadan. It gained prominence with the development of like-named high brow estate shortly after the Independence of Nigeria. There are two of such estates within the city; Old Bodija and New Bodija. The prime estate is home to many popular schools within the state. It is also home to Bodija Market which is one of the largest Markets in Ibadan.

One of the most popular schools in Bodija is the Bodija International College. It has a nursery and primary school, a junior school and a senior school. The school has impressive boarding facilities with strong emphasis on safety.

Bodija is also home to the Ibadan Business School; a Business Education Institution set up to primarily address the capacity needs of Public Governance Business, Private Sectors such as Micro, Small and Medium Scale Enterprises and individual members of the populace.

Renting an Apartment: Renting a 3-bedroom duplex in Bodija will cost you between N400,000 and N2 million.

Not many neighbourhood rival Oluyole in terms of popularity and social activities. The neighbourhood is known for its beautiful estates and the free-flowing lifestyle of its residents.

Other schools in the district are Rhema Chapel International College and the British Preparatory School. The latter is a co-educational prep for children aged 3 months to 11 years. At the school, the English National Curriculum is used as a basis for children in Years 1 to 6, with particular emphasis on Nigerian social studies and culture wherever possible.

Renting an Apartment: A 3-bedroom apartment in Oluyole goes for between N400,000 and N4 million.

Buying a House: You need between N35 million and N80 million to buy a house in Oluyole especially if you are looking at a minimum of a 4-bedroom home.

Iyaganku GRA in Ibadan is another fine neighbourhood. It’s peaceful, serene and popular for being home to the office of the Economic and Financial Crimes Commission (EFCC).

This is where The Vale College in Ibadan is located and it isn’t a coincidence. Iyaganku has a rich history of having some of the best schools in Ibadan. This explains the establishment of the Ibadan International School (IIS) within this district. The school has a pre-school, a junior school and a senior school as well as an A-Level programme.

Renting an Apartment: To rent a 4-bedroom apartment in Iyaganku GRA in Ibadan, your budget should sit between N1.7 million and N3.2 million.

Buying a House: A 3 bedroom terraced duplex in Iyaganku will cost you between N32 million and N150 million.

Whether you are relocating to Ibadan from another state or just moving within the state, the choice of where you live and where your child’s school is located is as important as the child’s education itself.

The neighbourhoods, schools, apartment renting options and house buying price range in Ibadan will help you make a better decision of where you should enrol your child as well as deciding on your next residence.

Red Flags to Look Out For During Home Inspection

The Pros and Cons of Using Property Agents